Fantage just released a set of new rare items, as well as debuting their new mobile game. They’ve released several new apps in the past few months so be sure to check them out! 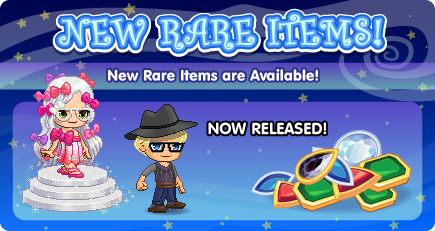 We have a set of five items; a cute ribbon outfit for girls and a casual outfit for guys.

Let’s start with the Fedora Hat. Otherwordly with 55 rare points.

1st outfit looks like a preppy kid ready to ask you to prom. 2nd is a nice carefree outfit, 3rd is all rares to keep it simple. I knew I wanted to do one with shades, and the last one is all rares too. Black, since it’s the outfit I’ll be wearing to your funeral after I slay you with this post. Now the “diamond” outfit:

When I saw the outfit I thought it looked almost medieval, so I kept that in mind when styling it. Now for the board, which I think is the best part of the set.

There’s so much that can be done with this board so it’ll be disappointing if it doesn’t get used to it’s full potential. Now some outfits with the new rares for girls:

Using the hair, the outfit and the glasses separately. The middle one is all rares, and it’s my favorite.

Moving on! In other news, the game that Fantage just released: Watch Yo! Back

“Watch Yo! Back” is the mobile game that Fantage just put out. I love that it’s subtitled in Katakana but that’s just me. The goal of the game is something adored by all gamers: Destruction! 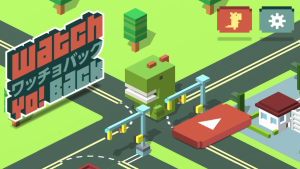 By default, you play as a Kaiju named Yobak, but other characters can be bought. You rage around destroying the city as much as you can, avoiding cops and enemies; it’s game over if you let them catch up with you. It seems cool, and I like the graphics. It’s worth checking out, and it’s free so why not? This is not the first, and likely won’t be the last mobile game we get from Fantage. In October they released a puzzle game “Zero”, and have been making apps since 2011.

Get the app here: for ANDROID and iOS.